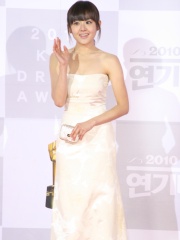 Moon Geun-young (Korean: 문근영; Hanja: 文瑾瑩; born May 6, 1987) is a South Korean actress. Affectionately called the "Nation's Little Sister," Moon began modeling at the age of 10, then made her acting debut in 1999 as a child actress. She first rose to stardom through her role as the young Eun-suh in the hugely popular television drama series Autumn in My Heart (2000), followed by a well-received turn in Kim Jee-woon's critically acclaimed horror film A Tale of Two Sisters (2003). Read more on Wikipedia

Since 2007, the English Wikipedia page of Moon Geun-young has received more than 1,575,641 page views. Her biography is available in 57 different languages on Wikipedia making her the 60th most popular model.

Among MODELS In South Korea