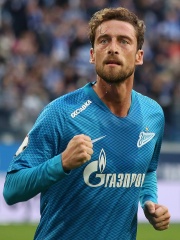 Claudio Marchisio (Italian pronunciation: [ˈklaudjo marˈkiːzjo]; born 19 January 1986) is an Italian former professional footballer who played as a midfielder. A product of the Juventus youth system, he spent a large portion of his career at his hometown club, with the exception of a season-long loan spell at Empoli, winning seven consecutive Serie A titles between 2012 and 2018, and four consecutive Coppa Italia titles between 2015 and 2018. Read more on Wikipedia

Since 2007, the English Wikipedia page of Claudio Marchisio has received more than 1,571,097 page views. His biography is available in 56 different languages on Wikipedia making him the 1,325th most popular soccer player.