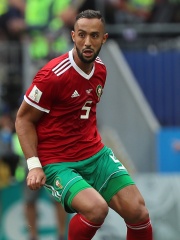 Medhi Amine El Mouttaqi Benatia (Arabic: المهدي أمين بن عطية المتقي‎, French pronunciation: ​[mɛdi bɛnatia] ; born 17 April 1987) is a French-Moroccan footballer who plays as a centre back for Al-Duhail and was captain of the Moroccan national team. On 2 October 2019, Benatia announced his retirement from international football.He began his career at Marseille, spending his time loaned out to Tours and Lorient before joining Clermont in 2008. Two years later he joined Udinese, spending three seasons there before transferring to Roma. Read more on Wikipedia

Since 2007, the English Wikipedia page of Medhi Benatia has received more than 1,380,200 page views. His biography is available in 45 different languages on Wikipedia making him the 1,707th most popular soccer player.