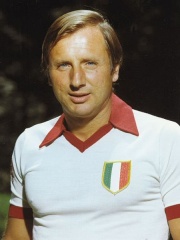 Giorgio Ferrini (Italian pronunciation: [ˈdʒordʒo ferˈriːni]; 18 August 1939 – 8 November 1976) was an Italian football manager and former football player who played as a midfielder. Nicknamed La Diga ('The Dam') for his qualities as a defensive midfielder, Ferrini played for Torino from 1959 to 1975, and is the most capped player in the history of the Granata with 566 appearances in all competitions, ahead of Paolo Pulici (437). At club level, he won the Coppa Italia in 1967–68 and 1970–71. Read more on Wikipedia

Among soccer players, Giorgio Ferrini ranks 1,495 out of 16,923. Before her are Baltazar, Pedro Manfredini, Gabriel Milito, Casemiro, René Llense, and Cayetano Ré. After her are Enrico Chiesa, Uwe Bein, Maniche, Ricardo Bochini, Heriberto Herrera, and Afonsinho.