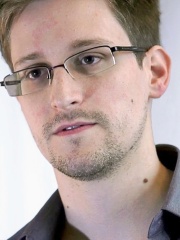 Edward Joseph Snowden (; born June 21, 1983) is an American former computer intelligence consultant who leaked highly classified information from the National Security Agency (NSA) in 2013, when he was an employee and subcontractor. His illegal disclosures revealed numerous global surveillance programs, many run by the NSA and the Five Eyes Intelligence Alliance with the cooperation of telecommunication companies and European governments, and prompted a cultural discussion about national security and individual privacy. In 2013, Snowden was hired by an NSA contractor, Booz Allen Hamilton, after previous employment with Dell and the CIA. Snowden says he gradually became disillusioned with the programs with which he was involved, and that he tried to raise his ethical concerns through internal channels but was ignored. Read more on Wikipedia

Edward Snowden is most famous for leaking classified information about the NSA's mass surveillance programs to the press.