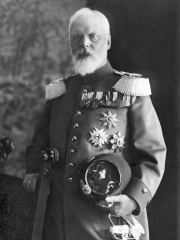 Ludwig III (Ludwig Luitpold Josef Maria Aloys Alfried; 7 January 1845 – 18 October 1921) was the last King of Bavaria, reigning from 1913 to 1918. Initially he served in the Bavarian military as a lieutenant and went on to hold the rank of Oberleutnant during the Austro-Prussian War. He entered politics at the age of 18 becoming a member of the Bavarian Legislature and was a keen participant in politics, supporting electoral reforms. Read more on Wikipedia

Page views of Ludwig III of Bavarias by language

Among politicians, Ludwig III of Bavaria ranks 1,273 out of 15,577. Before him are Isabella Clara Eugenia, Teodoro Obiang Nguema Mbasogo, Archduchess Maria Anna of Austria, Louis, Dauphin of France, Cyaxares, and Jovian. After him are Peter of Castile, As-Saffah, Emperor Wu of Jin, Herod Agrippa, Halford Mackinder, and Fredrik Bajer.