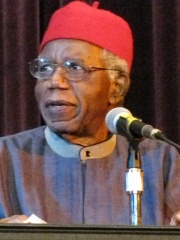 Chinua Achebe (; born Albert Chinụalụmọgụ Achebe, 16 November 1930 – 21 March 2013) was a Nigerian novelist, poet, professor, and critic. His first novel Things Fall Apart (1958), often considered his masterpiece, is the most widely read book in modern African literature.Raised by his parents in the Igbo town of Ogidi in southeastern Nigeria, Achebe excelled at school and won a scholarship to study medicine, but changed his studies to English literature at University College (now the University of Ibadan). He became fascinated with world religions and traditional African cultures, and began writing stories as a university student. Read more on Wikipedia

Since 2007, the English Wikipedia page of Chinua Achebe has received more than 2,125,351 page views. His biography is available in 71 different languages on Wikipedia making him the 1,166th most popular writer.