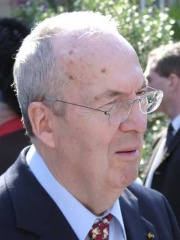 Manfred Rommel (24 December 1928 – 7 November 2013) was a German politician belonging to the Christian Democratic Union (CDU), who served as mayor of Stuttgart from 1974 until 1996. Rommel's policies were described as tolerant and liberal, and he was one of the most popular municipal politicians in Germany. He was the recipient of numerous foreign honours. Read more on Wikipedia

Manfred Rommel was a German general and son of Field Marshal Erwin Rommel. He was most famous for his involvement in the 20 July plot to assassinate Adolf Hitler.

Among politicians, Manfred Rommel ranks 3,776 out of 15,577. Before him are Emperor Xianzong of Tang, King You of Zhou, Alfonso, Prince of Asturias, Catherine of Navarre, Alberto Fernández, and Memnon. After him are Condoleezza Rice, Andrew Dickson White, Hibatullah Akhundzada, Princess Désirée, Baroness Silfverschiöld, Denis Thatcher, and Nguyễn Xuân Phúc.