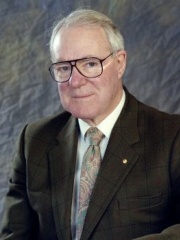 Sir John Warcup Cornforth Jr., AC, CBE, FRS, FAA (7 September 1917 – 8 December 2013) was an Australian–British chemist who won the Nobel Prize in Chemistry in 1975 for his work on the stereochemistry of enzyme-catalysed reactions, becoming the only Nobel laureate born in New South Wales.Cornforth investigated enzymes that catalyse changes in organic compounds, the substrates, by taking the place of hydrogen atoms in a substrate's chains and rings. In his syntheses and descriptions of the structure of various terpenes, olefins, and steroids, Cornforth determined specifically which cluster of hydrogen atoms in a substrate were replaced by an enzyme to effect a given change in the substrate, allowing him to detail the biosynthesis of cholesterol. Read more on Wikipedia

John cornforth is most famous for his work on the synthesis of vitamin B12.

Among CHEMISTS In Australia

Among chemists born in Australia, John Cornforth ranks 1. After him are David Warren (1925).