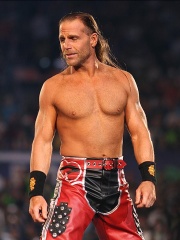 Michael Shawn Hickenbottom (born July 22, 1965), better known by his ring name Shawn Michaels, is an American retired professional wrestler. Widely regarded as one of the greatest professional wrestlers of all time, he is known by the nicknames "Heartbreak Kid", "The Showstopper", and "Mr. Read more on Wikipedia

Among wrestlers, Shawn Michaels ranks 54 out of 703. Before him are Rey Mysterio, Antonino Rocca, Dusty Rhodes, The Ultimate Warrior, Bobo Brazil, and Martin Klein. After him are Chiyonofuji Mitsugu, The Iron Sheik, Bayram Şit, Rudolf Svensson, Terry Funk, and Stephanos Christopoulos.