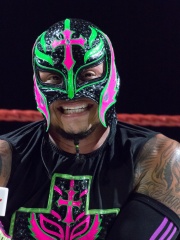 Óscar Gutiérrez (born December 11, 1974), better known by his ring name Rey Mysterio, is an American professional wrestler currently signed to WWE, where he performs on the Raw brand. Widely regarded as one of the most influential wrestlers of all time, Mysterio is credited for popularizing cruiserweight wrestling, and is one of the world's most recognizable lucha libre wrestlers.The nephew of Rey Misterio Sr., Mysterio began his professional wrestling career in 1989, at age 14, on the independent circuit, before signing with Asistencia Asesoría y Administración (AAA) in 1992. After a brief period performing for Extreme Championship Wrestling (ECW), Mysterio departed to World Championship Wrestling (WCW) in 1996. Read more on Wikipedia

Among wrestlers, Rey Mysterio ranks 48 out of 703. Before him are Randy Orton, Chris Benoit, Eduard Pütsep, Buddy Rogers, Ivar Johansson, and Jimmy Snuka. After him are Antonino Rocca, Dusty Rhodes, The Ultimate Warrior, Bobo Brazil, Martin Klein, and Shawn Michaels.