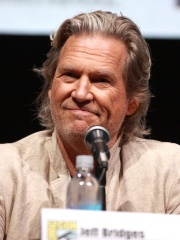 Jeffrey Leon Bridges (born December 4, 1949) is an American actor. Known for his versatility, he has received various accolades throughout his career spanning over seven decades, including an Academy Award and two Golden Globe Awards. Critic Pauline Kael wrote that Bridges "may be the most natural and least self-conscious screen actor that has ever lived."Bridges comes from a prominent acting family and appeared on the television series Sea Hunt (1958–1960) alongside his father, Lloyd Bridges, and brother, Beau Bridges. Read more on Wikipedia

Jeff Bridges is most famous for his role as The Dude in the 1998 film The Big Lebowski.