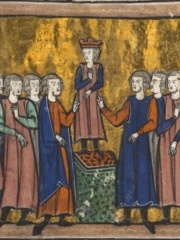 Baldwin V (1177 or 1178 – August 1186) was the king of Jerusalem who reigned together with his uncle Baldwin IV from 1183 to 1185 and, after his uncle's death, as the sole king from 1185 to his death. Baldwin IV's leprosy meant that he could not have children, and so he spent his reign grooming various relatives to succeed him. Finally his nephew was chosen, and Baldwin IV had him crowned as co-king in order to sideline the child's unpopular stepfather, Guy of Lusignan. Read more on Wikipedia

Page views of Baldwin V of Jerusalems by language

Among politicians, Baldwin V of Jerusalem ranks 1,310 out of 15,710. Before him are Zog I of Albania, Publius Cornelius Scipio, Wenceslaus III of Bohemia, Khosrow II, Crazy Horse, and Emperor Kōmei. After him are Alaric II, John VII Palaiologos, Minamoto no Yoritomo, Sogdianus of Persia, Gaspard II de Coligny, and Senusret III.