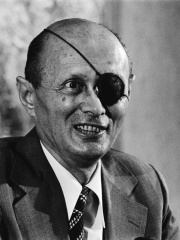 Moshe Dayan (Hebrew: משה דיין‎; 20 May 1915 – 16 October 1981) was an Israeli military leader and politician. As commander of the Jerusalem front in the 1948 Arab–Israeli War, Chief of Staff of the Israel Defense Forces (1953–1958) during the 1956 Suez Crisis, but mainly as Defense Minister during the Six-Day War in 1967, he became a worldwide fighting symbol of the new state of Israel. In the 1930s, Dayan joined the Haganah, the pre-state Jewish defense force of Mandatory Palestine. He served in the Special Night Squads under Orde Wingate during the Arab revolt in Palestine and later lost an eye in a raid on Vichy forces in Lebanon during World War II. Read more on Wikipedia

Moshe Dayan was a major military leader in the Israeli army. He is most famous for his role in the 1967 Six-Day War, when he led the Israeli forces to victory over Egypt, Jordan, and Syria.

Among politicians, Moshe Dayan ranks 487 out of 15,710. Before him are Sergio Mattarella, Alexios I Komnenos, Stephen Báthory, Louis VIII of France, Imre Nagy, and Frederick IX of Denmark. After him are William IV of the United Kingdom, Maximilian I of Mexico, Joseph I, Holy Roman Emperor, James II of England, Agrippina the Younger, and Geoffrey Plantagenet, Count of Anjou.