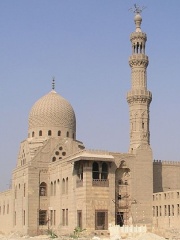 Al-Malik al-Zahir Rukn al-Din Baybars al-Bunduqdari (Arabic: الملك الظاهر ركن الدين بيبرس البندقداري, al-Malik al-Ẓāhir Rukn al-Dīn Baybars al-Bunduqdārī) (1223/1228 – 1 July 1277), of Turkic Kipchak origin, commonly known as Baybars (Arabic: بيبرس, Baybars) – nicknamed Abu al-Futuh (أبو الفتوح; English: Father of Conquests, referring to his victories) – was the fourth Mamluk sultan of Egypt in the Bahri dynasty, succeeding Qutuz. He was one of the commanders of the Egyptian forces that inflicted a defeat on the Seventh Crusade of King Louis IX of France. He also led the vanguard of the Egyptian army at the Battle of Ain Jalut in 1260, which marked the first substantial defeat of the Mongol army and is considered a turning point in history.The reign of Baybars marked the start of an age of Mamluk dominance in the Eastern Mediterranean and solidified the durability of their military system. Read more on Wikipedia

Baibars is most famous for being a Mamluk Sultan who ruled Egypt and Syria from 1260 to 1277. He was also the first ruler of the Bahri dynasty.

Page views of Baibars by language

Among politicians, Baibars ranks 413 out of 15,577. Before him are Servius Tullius, Abdullah of Saudi Arabia, Charles III of Spain, Louis Bonaparte, Louis VIII of France, and George III of the United Kingdom. After him are Yongle Emperor, Oleg of Novgorod, José Mujica, Matthias, Holy Roman Emperor, George II of Great Britain, and Severus Alexander.