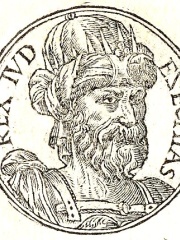 Hezekiah (; Hebrew: חִזְקִיָּהוּ H̱īzəqīyyahū), or Ezekias, (born c. 741 BCE, sole ruler c. 716/15–687/86 or 697–642) was, according to the Hebrew Bible, the son of Ahaz and the 13th king of Judah.According to the biblical narrative, Hezekiah witnessed the destruction of the northern Kingdom of Israel by Sargon's Assyrians in c. 722 BCE and was king of Judah during the siege of Jerusalem by Sennacherib in 701 BCE.Hezekiah enacted sweeping religious reforms, including a strict mandate for the sole worship of Yahweh and a prohibition on venerating other deities within the Temple of Jerusalem. He is considered a very righteous king in both the Second Book of Kings and the Second Book of Chronicles. He is also one of the more prominent kings of Judah mentioned in the Bible and is one of the kings mentioned in the genealogy of Jesus in the Gospel of Matthew. Read more on Wikipedia

Hezekiah is most famous for being the king of Judah who successfully defeated the Assyrian army in 701 BC.

Page views of Hezekiahs by language

Among politicians, Hezekiah ranks 626 out of 15,710. Before him are Emperor Jimmu, Catiline, Mobutu Sese Seko, Valentinian I, Mustafa IV, and Enrico Dandolo. After him are Olav V of Norway, Franjo Tuđman, Diane de Poitiers, Peleus, Charles I of Anjou, and Manuel I of Portugal.

Others Deceased in 697 BC