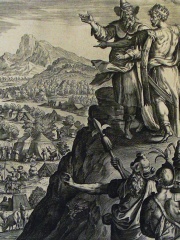 Balak (Hebrew: בָּלָק Bālāq) was a king of Moab described in the Book of Numbers in the Hebrew Bible, where his dealings with the prophet Balaam are recounted. Balak tried to engage Balaam for the purpose of cursing the migrating Israelite community. On his journey to meet the princes of Moab, Balaam is stopped by an angel of the lord after beating his donkey. Read more on Wikipedia

Page views of Balaks by language

Among politicians, Balak ranks 5,424 out of 15,577. Before him are Jerzy Buzek, Mate Boban, Anna of Hohenstaufen, Joan III, Countess of Burgundy, Khendjer, and Louis, Prince of Condé. After him are Zimri-Lim, Hassan Gouled Aptidon, Charles II, Duke of Savoy, Sinan Pasha, Tanaka Giichi, and George Boleyn, 2nd Viscount Rochford.