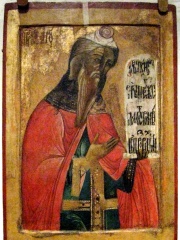 According to the Abrahamic religions, Aaron ( or ; Hebrew: אַהֲרֹן ’Ahărōn) was a prophet, high priest, and the elder brother of Moses. Knowledge of Aaron, along with his brother Moses, comes exclusively from religious texts, such as the Bible and Quran. The Hebrew Bible relates that, unlike Moses, who grew up in the Egyptian royal court, Aaron and his elder sister Miriam remained with their kinsmen in the eastern border-land of Egypt (Goshen). Read more on Wikipedia

Aaron is most famous for his contributions to the development of a new branch of mathematics known as set theory.

Page views of Aarons by language

Among religious figures, Aaron ranks 20 out of 2,272. Before him are Saint George, Francis of Assisi, Judas Iscariot, Elijah, Solomon, and John Calvin. After him are Ali, Saint Joseph, Abu Bakr, Pope Benedict XVI, Mary Magdalene, and Andrew the Apostle.

Among RELIGIOUS FIGURES In Jordan