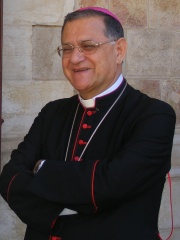 Fouad Twal (Arabic: البطريرك فؤاد طوال; born 23 October 1940 in Madaba, Jordan) is the emeritus Archbishop and Patriarch of the Latin Patriarchate of Jerusalem, having been its ordinary from 2008 to 2016. Read more on Wikipedia

Since 2007, the English Wikipedia page of Fouad Twal has received more than 75,156 page views. His biography is available in 21 different languages on Wikipedia (up from 20 in 2019). Fouad Twal is the 1,214th most popular religious figure, the 15th most popular biography from Jordan (down from 12th in 2019) and the 3rd most popular Jordanian Religious Figure.

Among religious figures, Fouad Twal ranks 1,214 out of 2,272. Before him are Oswald of Northumbria, Shenoute, Nicholas of Japan, Stephen Harding, Edward Schillebeeckx, and Barsanuphius. After him are Gregorio Barbarigo, Nicolaus Olahus, Isidore of Kiev, Jozef Tomko, 'Abd Allah ibn 'Amr ibn al-'As, and Maria Alexandrovna Ulyanova.

Among RELIGIOUS FIGURES In Jordan