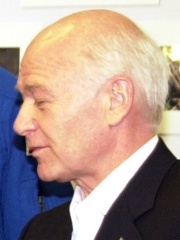 Aslan Abashidze (Georgian: ასლან აბაშიძე; born July 20, 1938) is the former leader of the Ajarian Autonomous Republic in western Georgia. He served in this capacity from 18 August 1991 to May 5, 2004. He resigned under the pressure of the central Georgian government and mass opposition rallies during the 2004 Adjara crisis, and has since lived in Moscow, Russia. Read more on Wikipedia

Among politicians, Aslan Abashidze ranks 6,529 out of 15,710. Before him are John IV, Duke of Brittany, Danilo, Crown Prince of Montenegro, Joseph Darnand, Yevno Azef, Princess Friederike of Hesse-Darmstadt, and Otto III, Margrave of Brandenburg. After him are Jean-Pierre Jabouille, Augustinas Voldemaras, Zoltán of Hungary, Maria of Courtenay, Abu Mahdi al-Muhandis, and Salitis.