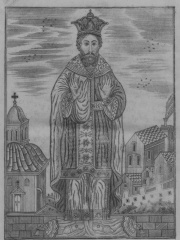 Bagrat IV (Georgian: ბაგრატ IV; 1018 – 24 November 1072), of the Bagrationi dynasty, was the King of Georgia from 1027 to 1072. During his long and eventful reign, Bagrat sought to repress the great nobility and to secure Georgia's sovereignty from the Byzantine and Seljuq Empires. In a series of intermingled conflicts, Bagrat succeeded in defeating his most powerful vassals and rivals of the Liparitid family, bringing several feudal enclaves under his control, and reducing the kings of Lorri and Kakheti, as well as the emir of Tbilisi to vassalage. Read more on Wikipedia

Page views of Bagrat IV of Georgias by language

Among politicians, Bagrat IV of Georgia ranks 6,621 out of 15,577. Before him are Servius Sulpicius Galba, Vladko Maček, Jacques Cathelineau, Chen Cheng, Ishme-Dagan I, and Emperor Kazan. After him are Roger III of Sicily, Hastings Banda, Henry L. Stimson, Henry XVI, Duke of Bavaria, Eduard Taaffe, 11th Viscount Taaffe, and Kubaba.