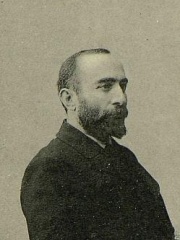 Nikoloz Chkheidze (Georgian: ნიკოლოზ (კარლო) ჩხეიძე; Russian: Никола́й (Карло) Семёнович Чхеи́дзе, Nikolay Semyonovich Chkhidze) commonly known as Karlo Chkheidze (21 March [O.S. 9] 1864 – 13 June 1926), was a Georgian politician. In the 1890s, he promoted the Social Democratic movement in Georgia. He became a key figure in the Russian Revolution (February 1917 to October 1917) as the Menshevik president of the Executive Committee of the Soviet of Petrograd (until September 1917). Read more on Wikipedia

Among politicians, Nikolay Chkheidze ranks 8,070 out of 15,577. Before him are Fiorello H. La Guardia, Margaret of Foix, Józef Haller, Hitoshi Ashida, Alfred Meyer, and Chen Gongbo. After him are Sen Katayama, Hat Hor, Baysunghur, Frederick III, Duke of Austria, Vladimir Kokovtsov, and Aloys I, Prince of Liechtenstein.