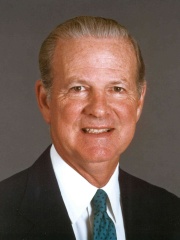 James Addison Baker III (born April 28, 1930) is an American attorney and political figure. He served as White House Chief of Staff and United States Secretary of the Treasury under President Ronald Reagan, and as U.S. Secretary of State and White House Chief of Staff under President George H. W. Bush. Born in Houston, Baker attended The Hill School and Princeton University before serving in the United States Marine Corps. Read more on Wikipedia

Since 2007, the English Wikipedia page of James Baker has received more than 1,739,016 page views. His biography is available in 37 different languages on Wikipedia making him the 7,033rd most popular politician.

Among politicians, James Baker ranks 6,992 out of 14,801. Before him are Henry XIV, Duke of Bavaria, Géraud Duroc, Ollanta Humala, Marcus Livius Drusus, John II, Duke of Bavaria, and Fayez al-Sarraj. After him are Kavad I, Ziaur Rahman, Anker Jørgensen, Petru Rareș, Malmfred of Kiev, and Trần Đại Quang.