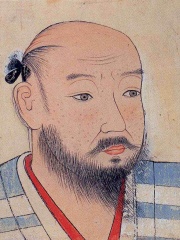 Ashikaga Yoshiteru (足利 義輝, March 31, 1536 – June 17, 1565), also known as Yoshifushi or Yoshifuji, was the 13th shōgun of the Ashikaga shogunate who reigned from 1546 to 1565 during the late Muromachi period of Japan. He was the eldest son of the 12th shōgun, Ashikaga Yoshiharu, and his mother was a daughter of Konoe Hisamichi (later called 慶寿院 Keijuin). When he became shogun in 1546 at age 11, Yoshiteru's name was Yoshifushi (sometimes transliterated as Yoshifuji); but some years later in 1554, he changed his name to the one by which he is conventionally known today. Read more on Wikipedia

Among politicians, Ashikaga Yoshiteru ranks 6,276 out of 15,577. Before him are Milan Obrenović II, Prince of Serbia, Arthur Greiser, Dabiša of Bosnia, Emperor Daozong of Liao, Muhammad Najib ar-Ruba'i, and Gilbert Horal. After him are Frederick Casimir Kettler, Magnus V of Norway, Princess Henriette of Belgium, Fulk IV, Count of Anjou, Jacopo Tiepolo, and Shalmaneser IV.