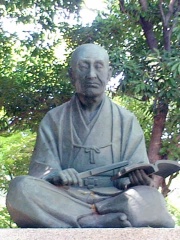 Chikamatsu Monzaemon (近松 門左衛門, real name Sugimori Nobumori, 杉森 信盛, 1653 – 6 January 1725) was a Japanese dramatist of jōruri, the form of puppet theater that later came to be known as bunraku, and the live-actor drama, kabuki. The Encyclopædia Britannica has written that he is "widely regarded as the greatest Japanese dramatist". His most famous plays deal with double-suicides of honor bound lovers. Read more on Wikipedia

Among people born in 1653, Chikamatsu Monzaemon ranks 9. Before him are Eleanor of Austria, Queen of Poland, Claudia Felicitas of Austria, Prince George of Denmark, André-Hercule de Fleury, Claude Louis Hector de Villars, and Georg Muffat. After him are Maria Amalia of Courland, Frederick Louis, Duke of Schleswig-Holstein-Sonderburg-Beck, Carlo Ruzzini, and Muhammad Azam Shah. Among people deceased in 1725, Chikamatsu Monzaemon ranks 3. Before him are Peter the Great and Alessandro Scarlatti. After him are Mahmud Hotak, Arai Hakuseki, Jonathan Wild, José Benito de Churriguera, and Sulkhan-Saba Orbeliani.