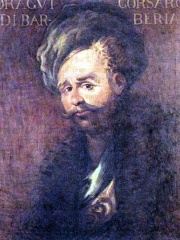 Dragut (Turkish: Turgut Reis) (1485 – 23 June 1565), known as "The Drawn Sword of Islam", was a Muslim Ottoman naval commander, governor, and noble, of Turkish or Greek descent. Under his command, the Ottoman Empire's maritime power was extended across North Africa. Recognized for his military genius, and as being among "the most dangerous" of corsairs, Dragut has been referred to as "the greatest pirate warrior of all time", "undoubtedly the most able of all the Turkish leaders", and "the uncrowned king of the Mediterranean". Read more on Wikipedia

Since 2007, the English Wikipedia page of Dragut has received more than 180,069 page views. His biography is available in 26 different languages on Wikipedia making him the 173rd most popular military personnel.

Page views of Draguts by language

Among MILITARY PERSONNELS In Turkey