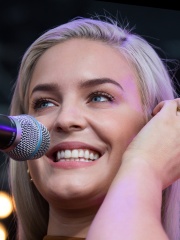 Anne-Marie Rose Nicholson (born 7 April 1991) is an English singer. She has attained charting singles on the UK Singles Chart, including Clean Bandit's "Rockabye", which peaked at number one, as well as "Alarm", "Ciao Adios", "Friends", "2002", "Don't Play" and "Kiss My (Uh-Oh)". Her debut studio album, Speak Your Mind, was released in 2018 and peaked at number three on the UK Albums Chart.Anne-Marie was nominated for four awards at the 2019 Brit Awards, including Best British Female Solo Artist. Read more on Wikipedia

Page views of Anne-Maries by language

Among singers, Anne-Marie ranks 2,086 out of 3,528. Before her are Tayanna, Vanna, 6ix9ine, Jill Johnson, Ernest Tubb, and Crystal Gayle. After her are Jerry Butler, Ray Price, Jeon So-mi, Sirusho, Shindong, and Edwyn Collins.