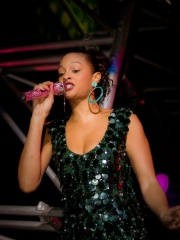 Alesha Anjanette Dixon (born 7 October 1978) is an English singer, rapper, songwriter, dancer, and television personality. Dixon rose to fame in the early 2000s as a member of the R&B/garage/rap trio Mis-Teeq. The group disbanded in 2005 and Dixon then pursued a music career as a solo artist, signing a recording contract to Polydor Records. Read more on Wikipedia

Among singers, Alesha Dixon ranks 1,626 out of 3,541. Before her are Irma Thomas, Raekwon, Joey Belladonna, Billy Fury, Tones and I, and Ol' Dirty Bastard. After her are Rakim, Redfoo, Benjamin Biolay, Grimes, Origa, and Andrea Berg.