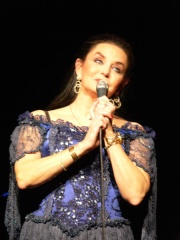 Crystal Gayle (born Brenda Gail Webb; January 9, 1951) is an American country music singer and songwriter. She is best known for her 1977 crossover hit, "Don't It Make My Brown Eyes Blue." Initially, Gayle's management and record label were the same as that of her oldest sister, Loretta Lynn. Not finding success with the arrangement after several years, and with Lynn's encouragement, Gayle decided to try a different approach. Read more on Wikipedia

Among singers, Crystal Gayle ranks 2,100 out of 3,541. Before her are Mark E. Smith, Nâdiya, JB, Juice Wrld, Sana, and Randy Blythe. After her are Azam Ali, Giorgia, Ida Corr, Younha, Paolo Nutini, and Idan Raichel.