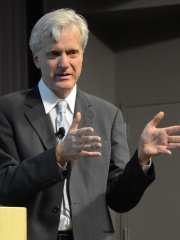 Andreas Maria Maximilian Freiherr von Mauchenheim genannt Bechtolsheim (born 30 September 1955) is a German electrical engineer, entrepreneur, investor, and billionaire. He co-founded Sun Microsystems in 1982 and was its chief hardware designer. He later became an investor, providing Sergey Brin and Larry Page with their first round of funding, a $100,000 investment in 1998 before the two had even incorporated their company, Google. Read more on Wikipedia

Since 2007, the English Wikipedia page of Andy Bechtolsheim has received more than 534,990 page views. His biography is available in 15 different languages on Wikipedia. Andy Bechtolsheim is the 336th most popular inventor (down from 304th in 2019).