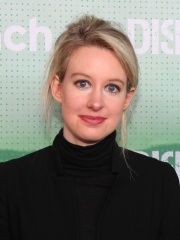 Elizabeth Anne Holmes (born February 3, 1984) is an American businesswoman who founded and was the CEO of Theranos, a now-defunct health technology company. Theranos soared in valuation after the company claimed to have revolutionized blood testing by developing testing methods that could use surprisingly small volumes of blood, such as from a fingerprick. By 2015, Forbes had named Holmes the youngest and wealthiest self-made female billionaire in America, on the basis of a $9 billion valuation of her company. Read more on Wikipedia

Since 2007, the English Wikipedia page of Elizabeth Holmes has received more than 12,342,590 page views. Her biography is available in 22 different languages on Wikipedia making her the 316th most popular inventor.