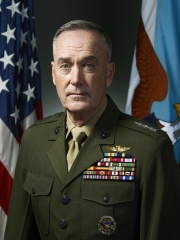 Joseph Francis Dunford Jr. (born December 23, 1955) is a retired United States Marine Corps general, who served as the 19th Chairman of the Joint Chiefs of Staff from October 1, 2015 until September 30, 2019. He was the 36th Commandant of the Marine Corps. Read more on Wikipedia

Since 2007, the English Wikipedia page of Joseph Dunford has received more than 1,745,485 page views. His biography is available in 17 different languages on Wikipedia making him the 1,150th most popular military personnel.