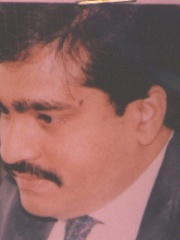 Dawood Ibrahim Kaskar (born 26 December 1955) is a mobster and drug dealer most wanted by India with a reward of $25 million. He is originally from Dongri, Mumbai.He has been previously reported to be living in Karachi, Pakistan, though the government denies it, and heads the Indian organised crime syndicate D-Company which he founded in Mumbai in the 1970s. Dawood is wanted on the charges of terrorism, murder, extortion, targeted killing, drug trafficking and various other cases. Read more on Wikipedia

Since 2007, the English Wikipedia page of Dawood Ibrahim has received more than 8,567,582 page views. His biography is available in 20 different languages on Wikipedia making him the 165th most popular extremist.

Among EXTREMISTS In India

Among extremists born in India, Dawood Ibrahim ranks 2. Before him are Nathuram Godse (1910).