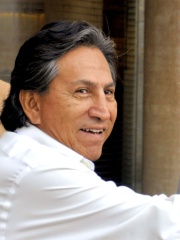 Alejandro Celestino Toledo Manrique (Spanish: [aleˈxandɾo toˈleðo]; born 28 March 1946) is a Peruvian politician who served President of Peru, from 2001 to 2006. He gained international prominence after leading the opposition against president Alberto Fujimori, who held the presidency from 1990 to 2000. He pursued his undergraduate and graduate education at the University of San Francisco and Stanford University. Read more on Wikipedia

Among politicians, Alejandro Toledo ranks 7,261 out of 15,577. Before him are Suleiman II, Gaius Terentius Varro, Alexander Gauland, Alberic I of Spoleto, Nestor Lakoba, and Leopold IV, Prince of Lippe. After him are Archduke Leopold Salvator of Austria, Armand Călinescu, Lord William Bentinck, Ce Acatl Topiltzin, Leo Tindemans, and Mithridates III of Pontus.