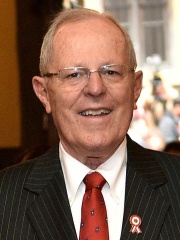 Pedro Pablo Kuczynski Godard (Spanish: [kuˈtʃinski ɣoˈðarð]; born 3 October 1938), also known simply as PPK (Spanish: [pepeˈka]), is a Peruvian economist, politician and public administrator who served as President of Peru from 2016 to 2018. He served as the Prime Minister of Peru and Minister of Economy and Finance during the presidency of Alejandro Toledo. Kuczynski resigned from the presidency on 23 March 2018, following a successful impeachment vote and days before a probable conviction vote. Read more on Wikipedia

Pedro Pablo Kuczynski is a Peruvian economist and politician who was the Prime Minister of Peru from 2016 to 2018. He is best known for being the first non-Peruvian president of Peru in over 50 years.

Among politicians, Pedro Pablo Kuczynski ranks 3,073 out of 15,710. Before him are Hilderic, Walter Sans Avoir, Pier Luigi Farnese, Duke of Parma, Philibert II, Duke of Savoy, Hjalmar Branting, and Henri, Prince of Condé. After him are Deiphobus, Than Shwe, Władysław Gomułka, Lucius Vitellius the Elder, Cayetana Fitz-James Stuart, 18th Duchess of Alba, and Junichiro Koizumi.