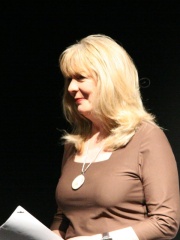 Alison Steadman, (born 26 August 1946) is an English actor. She was nominated for the 1991 National Society of Film Critics Award for Best Actress for the Mike Leigh film Life Is Sweet, and the 1993 Olivier Award for Best Actress for her role as Mari in the original production of The Rise and Fall of Little Voice. In a 2007 Channel 4 poll, the "50 Greatest Actors" voted for by other actors, she was ranked No. Read more on Wikipedia

Since 2007, the English Wikipedia page of Alison Steadman has received more than 1,444,686 page views. Her biography is available in 17 different languages on Wikipedia making her the 1,628th most popular actor.

Among actors, Alison Steadman ranks 1,608 out of 8,832. Before her are Annabella, Will Ferrell, Mila Kunis, Amanda Seyfried, Frank Finlay, and Melissa Leo. After her are Frederic Forrest, Ed Asner, Henry Cavill, Jean Carmet, Eric Campbell, and Xuxa.