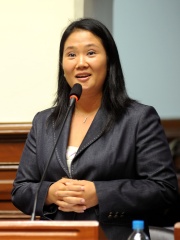 Keiko Sofía Fujimori Higuchi (Spanish: [ˈkejko soˈfi.a fuxiˈmoɾi (x)iˈɣutʃi] or [fu(ɟ)ʝiˈmoɾi]; born 25 May 1975) is a Peruvian business administrator and politician, who is the eldest daughter of former Peruvian president Alberto Fujimori and Susana Higuchi, and formerly in role as the First Lady of Peru from 1994 to 2000. She is the congresswoman representing the Lima Metropolitan Area from 2006 to 2011 and has served as the leader of the Fujimorist political party Popular Force since 2010. Fujimori ran for president in the 2011 and 2016 elections but was defeated by a narrow margin in the second round both times. Read more on Wikipedia

Among politicians, Keiko Fujimori ranks 13,216 out of 15,710. Before her are Dipendra of Nepal, Eanfrith of Bernicia, Jean-Pierre Bemba, Jean-Louis Debré, Volodymyr Groysman, and Kessai Note. After her are Emil Jónsson, James Wilson, Wehha of East Anglia, Ivar Lykke, Fadil Vokrri, and Leónidas Plaza.