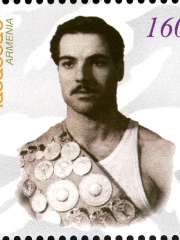 Albert Azaryan (Armenian: Ալբերտ Ազարյան; born 11 February 1929) is a former Soviet Armenian artistic gymnast who competed internationally representing the Soviet Union. He is the 1956 and 1960 Olympic Champion on the still rings. Azaryan is the first gymnast to become an Olympic Champion in Rings twice, a feat that Akinori Nakayama would accomplish twelve years later and that no one else has matched since. Read more on Wikipedia

Among politicians, Albert Azaryan ranks 9,498 out of 15,710. Before him are Yangwon of Goguryeo, Mustafa Shokay, Bisinus, Zhang Dejiang, Rafael Urdaneta, and Miguel Trovoada. After him are Rahotep, Svetozar Pribićević, Oswiu, Robert Gates, William Joseph Simmons, and Arnulf, Count of Holland.