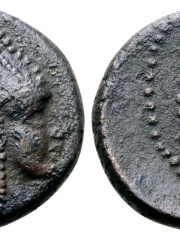 Tigranes III (50s BC–8 BC) was a Prince of the Kingdom of Armenia and member of the Artaxiad Dynasty who served as a Roman Client King of Armenia. Read more on Wikipedia

Among politicians, Tigranes III ranks 5,713 out of 15,577. Before him are Sitamun, Glaucus of Corinth, Shahrokh Shah, Athanagild, Al-Mustansir Billah, and Countess Louise Henriette of Nassau. After him are Zhang Chunqiao, Joseph Bech, Jean-Claude Duvalier, Abd al-Hafid of Morocco, Maria Komnene, Queen of Jerusalem, and Pacorus II.

Among people born in 100 BC, Tigranes III ranks 31. Before him are Mary of Clopas, Judas of Galilee, Antigonus II Mattathias, Phraates V, Marcus Antistius Labeo, and Vonones I. After him are Quintus Caecilius Metellus Pius Scipio Nasica, Alexander Polyhistor, Artaxias II, Cassivellaunus, Aretas IV Philopatris, and Aulus Plautius. Among people deceased in 100 BC, Tigranes III ranks 9. Before him are Gnaeus Pompeius Trogus, Wang Zhaojun, Sosigenes of Alexandria, Publilius Syrus, Timaeus of Locri, and Antipater of Sidon. After him are Bocchus I, Apollonius Molon, Lucius Appuleius Saturninus, Artemidorus Ephesius, Gnaeus Cornelius Lentulus Clodianus, and Aretas III.