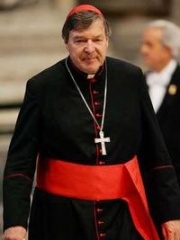 George Pell (born 8 June 1941) is an Australian cardinal of the Catholic Church. He served as the inaugural prefect of the Secretariat for the Economy between 2014 and 2019, and was a member of the Council of Cardinal Advisers between 2013 and 2018. Ordained a priest in 1966 and bishop in 1987, he was made a cardinal in 2003. Read more on Wikipedia

Among religious figures, George Pell ranks 1,412 out of 2,272. Before him are Joseph Genesius, Joshua the High Priest, Theophylact of Constantinople, Raffaele Riario, Pope Cyril VI of Alexandria, and Maurice Bavaud. After him are Audrys Bačkis, Pandita Ramabai, Andrew Corsini, Fariduddin Ganjshakar, Soga no Umako, and Gershom ben Judah.

Among RELIGIOUS FIGURES In Australia