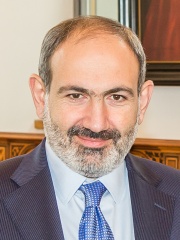 Nikol Vovayi Pashinyan (Armenian: Նիկոլ Վովայի Փաշինյան, pronounced [nikɔl pʰɑʃinˈjɑn]; born 1 June 1975) is an Armenian politician serving as the prime minister of Armenia since 8 May 2018.A journalist by profession, Pashinyan founded his own newspaper in 1998, which was shut down a year later for libel. He was sentenced for one year for defamation against then Minister of National Security Serzh Sargsyan. He edited the newspaper Haykakan Zhamanak ("Armenian Times") from 1999 to 2012. Read more on Wikipedia

Among politicians, Nikol Pashinyan ranks 8,502 out of 15,577. Before him are Alpaida, Sabinianus, Micheon of Goguryeo, Manea Mănescu, Gerhard Klopfer, and Piet de Jong. After him are Hunald I, Miklós Németh, Sighere of Essex, Rauf Orbay, Ferdinand von Bredow, and Pelops of Sparta.