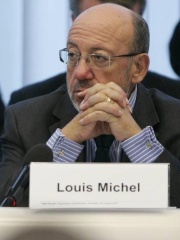 Louis Michel (born 2 September 1947) is a Belgian politician. He served in the government of Belgium as Minister of Foreign Affairs from 1999 to 2004 and was European Commissioner for Development and Humanitarian Aid from 2004 to 2009. From 2009 to 2019, he was a Member of the European Parliament. Read more on Wikipedia

Among politicians, Louis Michel ranks 9,410 out of 15,710. Before him are Reginar I Longneck, Julius Leber, Quim Torra, George Koval, Benigno Aquino III, and Paul Poupard. After him are István Bethlen, Princess Henriëtte Amalia of Anhalt-Dessau, Alvise I Mocenigo, Pietro Loredan, Qu Qiubai, and Dwight F. Davis.