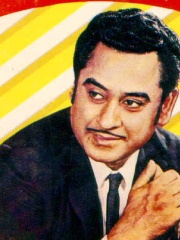 Abhas Kumar Ganguly (born 4 August 1929 – 13 October 1987), better known by his stage name Kishore Kumar (pronunciation ) was an Indian playback singer, actor, music director, lyricist, writer, director, producer and screenwriter. He was one of the most popular singers in the Indian film industry and from soft numbers to peppy tracks to romantic moods, Kumar sang in different genres but some of his rare compositions which were considered classics were lost in time. According to Ashok Kumar, Kumar's success came because his voice hit the microphone straight at its most sensitive point.Apart from Hindi, he sang in many Indian languages including Bengali, Marathi, Assamese, Gujarati, Kannada, Bhojpuri, Malayalam and Urdu. Read more on Wikipedia

Since 2007, the English Wikipedia page of Kishore Kumar has received more than 6,444,137 page views. His biography is available in 33 different languages on Wikipedia making him the 631st most popular singer.