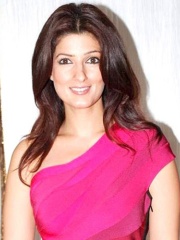 Twinkle Khanna (also known as Tina Jatin Khanna; born on 29 December 1974) is an Indian author, newspaper columnist, interior designer, film producer and actress who worked in Hindi films. In 2015, she released her first non-fiction book, "MrsFunnybones" which was declared a bestseller, making Khanna India's highest-selling woman writer that year. Her second book, The Legend of Lakshmi Prasad, a collection of short stories, one of which was based on social entrepreneur Arunachalam Muruganantham was later made into National Award-winning feature film, Pad Man with the focus on dispelling taboos around menstruation It was produced under Khanna's production house Mrs. Read more on Wikipedia