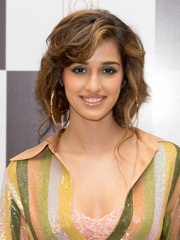 Disha Patani (pronounced [d̪ɪˈʃaː pəˈʈaːni]) is an Indian actress who works primarily in Hindi films. She began her acting career with the Telugu film Loafer (2015), opposite Varun Tej. After making her Bollywood debut in the sports biopic M.S. Dhoni: The Untold Story (2016), she starred in the Chinese action comedy Kung Fu Yoga (2017), which ranks among the highest-grossing Chinese films of all time. Read more on Wikipedia

Since 2007, the English Wikipedia page of Disha Patani has received more than 9,530,738 page views. Her biography is available in 25 different languages on Wikipedia making her the 8,598th most popular actor.