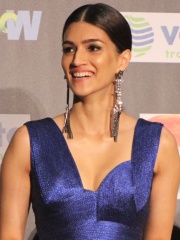 Kriti Sanon (born 27 July 1990) is an Indian actress who appears predominantly in Hindi films. She made her acting debut with the Telugu psychological thriller 1: Nenokkadine in 2014. Sanon won the Filmfare Award for Best Female Debut for her performance in the action film Heropanti (2014), which marked her first project in Hindi cinema.Sanon has since starred in the commercially successful romantic comedies Bareilly Ki Barfi (2017) and Luka Chuppi (2019), and her highest-grossing releases came with the ensemble comedies Dilwale (2015) and Housefull 4 (2019). Read more on Wikipedia

Among actors, Kriti Sanon ranks 11,237 out of 9,996. Before her are Tiwa Savage, Liam O'Brien, Sophia Ali, Zosia Mamet, Bret McKenzie, and Ashleigh Ball. After her are Alex Newell, Shin Hye-jeong, Cathy Cavadini, Mana Ashida, Nathan Parsons, and Will Chase.