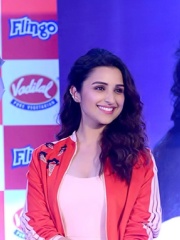 Parineeti Chopra (pronounced [pəriːniːt̪iː ˈtʃoːpɽaː]; born 22 October 1988) is an Indian actress and singer who appears in Hindi films. Chopra is a recipient of several accolades, including a Filmfare and National Film Award. She initially aspired to pursue a career in investment banking, but after obtaining a triple honours degree in business, finance and economics from Manchester Business School she returned to India during the 2009 economic recession and joined Yash Raj Films as a public relations consultant. Read more on Wikipedia

Since 2007, the English Wikipedia page of Parineeti Chopra has received more than 6,018,512 page views. Her biography is available in 33 different languages on Wikipedia making her the 7,944th most popular actor.