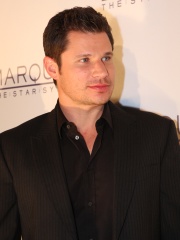 Nicholas Scott Lachey ( lə-SHAY; born November 9, 1973) is an American actor, singer, and television personality and host. He rose to fame as the lead singer of the multi-platinum-selling boyband 98 Degrees, and later starred in the reality series Newlyweds: Nick and Jessica with his then-wife, Jessica Simpson. He has released four solo albums: SoulO, What's Left of Me, A Father's Lullaby, and Soundtrack of My Life. Read more on Wikipedia

Since 2007, the English Wikipedia page of Nick Lachey has received more than 4,523,680 page views. His biography is available in 24 different languages on Wikipedia making him the 7,020th most popular actor.