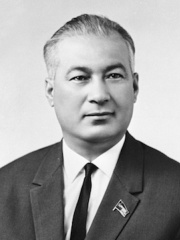 Sharof Rashidovich Rashidov (Uzbek Cyrillic: Шароф Рашидович Рашидов; Russian: Шараф Рашидович Рашидов Sharaf Rashidovich Rashidov; 6 November [O.S. 24 October] 1917 – 31 October 1983) was a Communist Party leader in the Uzbek SSR and a CPSU Central Committee Politburo candidate member between 1961 and 1983. Born the day before the Russian Revolution to a poor peasant family in Jizzakh, Uzbekistan, Sharaf Rashidov worked as a teacher, journalist and editor for a Samarkand newspaper. He returned home in 1942 with wounds suffered on the German front in World War II. He became head of the Uzbekistan Writers Union in 1949, and was elected to the post of Chairman of the Praesidium of the Uzbek Supreme Soviet in 1950. Read more on Wikipedia

Among politicians, Sharof Rashidov ranks 9,471 out of 15,710. Before him are Titu Maiorescu, Ben Ferencz, Imyremeshaw, Theodore Eustace, Count Palatine of Sulzbach, Francis I Rákóczi, and Orodes I of Parthia. After him are Appius Claudius Sabinus Regillensis, Baghdadi Mahmudi, Lucius Licinius Lucullus, Charles W. Fairbanks, Barbara Palmer, 1st Duchess of Cleveland, and George II, Prince of Waldeck and Pyrmont.