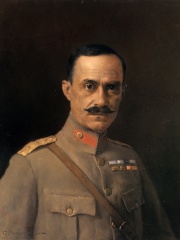 Nikolaos Plastiras (Greek: Νικόλαος Πλαστήρας; 4 November 1883 – 26 July 1953) was a Greek general and politician, who served thrice as Prime Minister of Greece. A distinguished soldier known for his personal bravery, he became famous as "The Black Rider" during the Greco-Turkish War of 1919–1922, where he commanded the 5/42 Evzone Regiment. After the Greek defeat in the war, along with other Venizelist officers he launched the 11 September 1922 Revolution that deposed King Constantine I of Greece and his government. Read more on Wikipedia

Among politicians, Nikolaos Plastiras ranks 8,162 out of 15,710. Before him are Irene Asanina, Gabriel Ramanantsoa, László Bárdossy, Galindo Aznárez II, Hugo Haase, and Khertek Anchimaa-Toka. After him are Hyder Ali, Agnello Participazio, Ermengol I, Count of Urgell, Luis Somoza Debayle, William VII, Landgrave of Hesse-Kassel, and Ernest of Bavaria.